I couldn’t breathe. I couldn’t think. I was entirely aghast and heartbroken.

I couldn’t believe I was in this place again.

“Hi,” I sobbed breathlessly into my phone. “I really can’t be alone right now. Can you come over?”
“I’ll be right there.”
Joan clicked off and I buried my tearful face back into my pillows, returning to an all too familiar state of despondency.

How do I properly encapsulate a six month period that had lasted a thousand years? I was parched, a desert aching for rain. I was a garden, overpowered by ruthless weeds. I was a trumpet longing to make music, held in the hands of someone who no longer knew how to play.

I was bone-weary. Every night the moon sympathetically looked on as I crawled into bed and cried until the ocean of grief inside me would no longer yield salty tears. Then I would pray until exhaustion forced my eyes closed for a few fitful – yet blissful – hours of escaping reality. It had been a season of hard choices, relationships ending, and misunderstandings. I was so sad, so lonely, so tired.

Please understand that I am intimately familiar with grief. I know its knock on my door, I recognize its feet on the landing. But it is an entirely different thing to grieve the loss of someone who is still alive than it is to grieve the loss of someone who has died. This was uncharted territory for me. When I did manage to have a coherent thought, it was something along the lines of it wasn’t supposed to happen this way. And then I would spend hours tormenting myself upturning every stone in the graveyard of our shared memories, wondering what I could have done differently, if there was something –anything – I could have done to have salvaged the relationship. But regardless of the number of hours spent digging my fingers raw and bloody, the results were always the same – there was nothing to be done, except let the dead bury their own dead.

Joan arrived and held me as I wept over – yet another – friendship ending. And then, knowing that words were trite and insufficient, she very practically bought me a gallon of my favorite flavor of ice cream and turned on Parks & Rec.

“I don’t understand why things like this keep happening to me,” I lamented to her. “I’m not strong enough for this.”

Isn’t it funny that sometimes, though the truth is right there before our eyes, we are blind to it?

Joan, being the incredible friend that she is, didn’t capitalize on the opportunity to speak Christianese platitudes to me. She knows me well enough to know how unapologetically stubborn I can be when told things I’m not ready to hear. She knew it was imperative that I walk through this and all of the emotions that accompany it in order to arrive in one piece on the other side. And so, in a wise effort to spare herself from awakening the beast, she simply said, “I don’t know why these things keep happening to you either, Amy. Do you want to watch another episode of Parks & Rec?”

And then she grabbed my hand in a reassuring squeeze, communicating in the way that words cannot that she’d be there for me throughout the duration of my journey and beyond. Sweet, intelligent Joan.

You see, the fact that I wasn’t strong enough was exactly the point. What I was seeing as devastation was actually an invitation.

I was being invited into a deeper and sweeter relationship with God, an intimacy with Him unlike any I had ever known. But that required me to face the deepest and ugliest parts of myself. I had to be honest with myself so that I could be honest with God. It required me to release the dreams I was holding with white-knuckled determination. Perhaps one of Satan’s most pervasive lies is this idea of “Christ and.” If I only had Christ and __________, I would be happy. There is no “and.” There is only Christ. God was teaching me to hate my own mother and father and sisters, even my own life, in light of His glory and grace (Luke 14:26). He was teaching me to work out my salvation with fear and trembling (Philippians 2:12). God was allowing me to be shaken to the stones of my foundation so that the faulty structures I had built would crumble, and I would be left with the only thing worth having: Christ.

Unbeknownst to me, since Nancy had passed away, all of my relationships have been colored through that lens of grief and loss. Sometime after she passed, (perhaps even immediately after she passed,) I went from holding my relationships loosely to holding them fiercely in a vice grip, only loosening my unwilling fingers once my hand was forced. Relationships are beautiful things, and I truly believe that they are one of the only things worth doing. However, they must be kept in their proper place. The root issue wasn’t relationships. The root issue was one of control. I was desperately clawing for control because I was terrified of losing another person. In fact, I was so scared of losing someone again that I allowed myself to be repeatedly mistreated if it meant keeping relationships intact.

Fear is the antithesis of faith. After all, “There is no fear in love. But perfect love drives out fear” (1 John 4:18). You cannot take steps forward in faith if you’re allowing fear to have the final word. The steps are not available to you. Ironically, in my quest for control, I lost control. My quest to be in control landed me in bedridden grief for months. I had to withdraw from my classes in order to wrestle.

Fortunately, though we are saved by faith alone, we do not have to operate by faith that is alone (paraphrase of Martin Luther.) My friends rallied around me. This season of darkness was lit with the unprovoked provision of meals, bouquets, letters, and other gestures reminding me I was loved and cared for, not the least of which involved a gallon of ice cream. Meanwhile, God chiseled away. 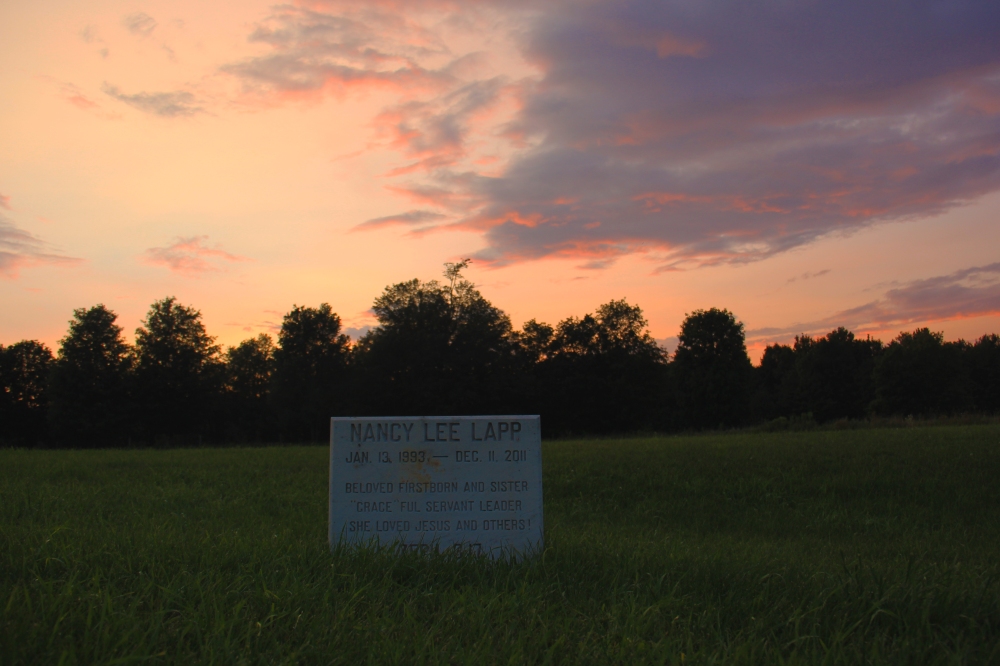 During the end of this season I went home, and wished for the hundredth thousandth time that I could have a conversation with Nancy about all this. And as I was sitting there, watching the sun sink below the trees behind her gravestone, my thirsty heart received its first drop of rain in months.

“The Lord your God is with you,
the Mighty Warrior who saves.
He will take great delight in you;
in his love he will no longer rebuke you,
but will rejoice over you with singing.”
Zephaniah 3:17,
the verse referenced on Nancy’s gravestone,
the verse she referenced in her final letter to my mom

I was sitting where my sister was buried, and yet I knew that her funeral only served as an earmark of her crossing into eternal celebration and communion with her savior. I was sitting in the place of Victory, not wallowing in the place of Defeat. Nancy’s grave is place to worship, a Monument of Redemption and Resurrection. The same God she looked upon daily was with me in this very moment, and had been through all the recent months of grief and loss.

This was a God I wanted to serve. Unabashedly, unashamedly, and undistractedly.

Death looks beautiful on the face of Jesus.

I had been parched so that I would learn to long for Living Water. I had been undone to become like His Son.

Suddenly, after months of observing a seemingly barren garden, green sprouts came gasping through the soil, in search of water. My cup was running over.

“I will give you a new heart and put a new spirit in you; I will remove from you your heart of stone and give you a heart of flesh.”
Ezekiel 36:26

“For you have died, and your life is now hidden with Christ in God.”
Colossians 3:3

One thought on “Undone to Become”

I'm a recovering Evangelical who remains deeply in love with Jesus. Ironically and unfortunately, one does not negate the other. View all posts by Amy Joyce